Be the first to review this product
€92.95
In stock
Only 3 left
Add to Wish List
When you desire Exclusivity.. Make an exclusive and memorable experience. Enhance your collection with inimitable, age-worthy wines. Give a precious gift.An icon of Italian excellence. Intense ruby red colored, Mille e una Notte 2017 is characterized by an ample bouquet, with fruity notes (blackberry and black mulberry) and balsamic (liquorice) and scents of cocoa and vanilla. The palate is soft and embracing, surprising with an extraordinary silky tannin. A remarkable long persistence on the finish. Delicious with any roast, especially a slow-cooked rack of lamb.ABV 13.5%Artists LabelThe palace illustrated on the label is Palazzo Filangeri di Cutò where Queen Maria Carolina took refuge fleeing from Naples, the house loved by the writer Tomasi di Lampedusa. Gabriella captures the image and embeds it into a “Mille e una Notte” sky. A tribute to the masterpiece of oriental literature capable of recounting a thousand and one tales.One Minute Wine Tales 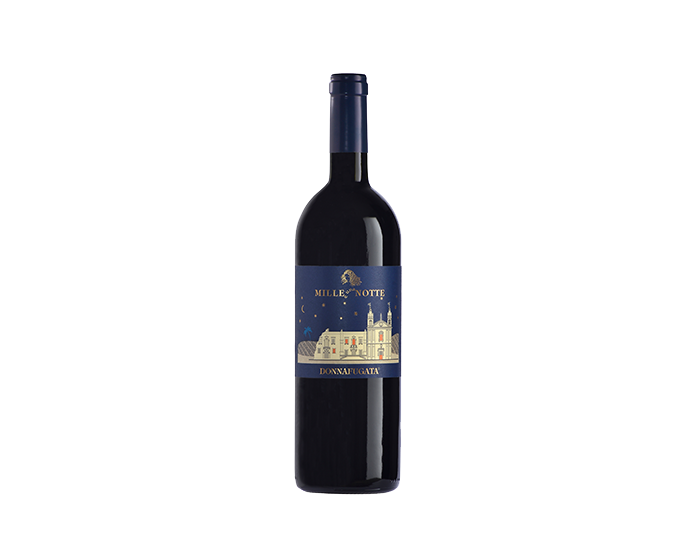 Details
The Rallo family has made wine in Marsala since 1851 and their ancient cellars tunnel beneath the city. They were one of the first families to begin making high quality table wine when sales of traditional Marsala started to decline, launching the Donnafugata label in 1983 and championing the potential of the region's native varieties. Today, Donnafugata has four estates in Sicily: a modern winery and 283 hectares at Contessa Entellina in the hills east of Marsala; 36 hectares in Vittoria to the south eastern point of the island; 68 hectares on the island of Pantelleria; and 18 hectares on the slopes of Etna. Donnafugata means 'fleeing woman' and is a reference to Queen Maria Carolina, who escaped the court of Naples in the early 19th century with her husband, Ferdinand IV of Bourbon, when Napoleon's troops arrived. The couple took refuge in Sicily at the Santa Margherita Belice palace, also the favourite residence of celebrated writer Giuseppe Tomasi di Lampedusa and depicted on the 'Mille e una Notte' label.
More Information
Reviews
Write Your Own Review
Recently Viewed
No recently views items
Clear All