Be the first to review this product
€19.95
Out of stock
Add to Wish List
Tasting Notes Colour: Pale-straw. Bouquet: Intense, fresh, with aromas of pineapple and green apple. Taste: Well-balanced, with gentle acidity and delicate, dry finish.ABV 12.5%THE LEGEND OF PRINCIPESSA GAVIA The name Principessa Gavia comes from a historical tale: a princess named Gavia fell in love with a handsome man who served as a guard in her father's court. The couple sought the king's permission to marry, but he refused to have his daughter wed out of her class. Desperate, the young couple fled to a distant part of the kingdom and settled in a sleepy village on the other side of the alps. They eluded the king's troops until one night, after enjoying a generous amount of a local white wine, the groom confided their story to the local innkeeper. The innkeeper nodded and feigned sympathy, but sent word to the king and collected a handsome reward. Troops found the couple and brought them back to the king to face punishment. The King looked into his daughter's eyes and could not help but forgive her. He blessed their union, and as a wedding gift, bequeathed them the town which they had chosen to settle in. In her honour he gave the name Gavi to the town as well as the charming white wine they drank. 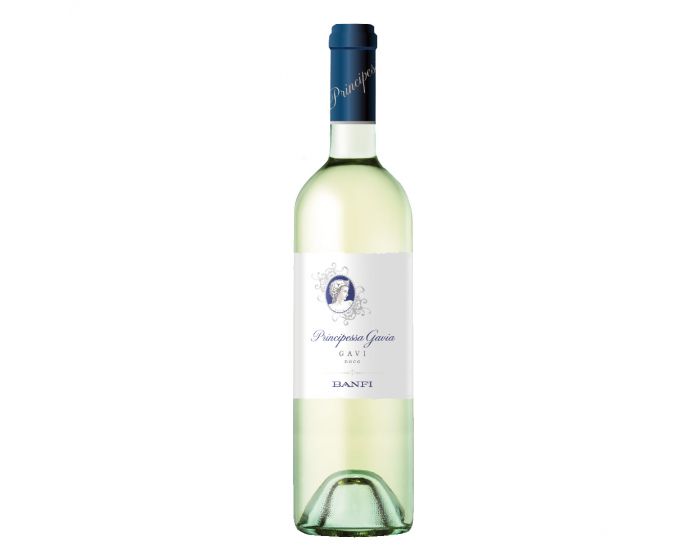 Details
Tuscany’s most honoured vineyard estate, Castello Banfi’s award-winning wines are exported to over 90 countries around the world. Lauded for groundbreaking research on the Sangiovese vine to produce superior Brunello and super Tuscan wines; producing healthy, more organic wines that are low in sulfites and histamines; and developing cutting edge winemaking techniques, Castello Banfi is the first winery in the world to be awarded international recognition for exceptional environmental, ethical and social responsibility as well as an international leader in customer satisfaction
More Information
Reviews
Write Your Own Review
Recently Viewed
No recently views items
Clear All