Be the first to review this product
€159.95
In stock
Only 9 left
Add to Wish List
Twenty Years Of Elegant Complexity Made with the same passion and attention to detail as Ornellaia, Le Serre Nuove dell’Ornellaia is a true "second vin". For this release, the number twenty stands out at the centre of the wine’s new label, recalling a history of achievements which over the past two decades has accompanied Le Serre Nuove dell’Ornellaia and enabled it to earn global recognition as a true Italian collectible. A wine with great capability for ageing—and yet also ready for enjoyment now, a blend of Merlot, Cabernet Sauvignon, Cabernet Franc & Petit Verdot, it combines approachability and a depth of flavour with proven ageing potential. Wine Maker Tasting Notes “Le Serre Nuove dell’Ornellaia 2017 expresses itself with outstanding elegance, combining great ageing potential with immediate enjoyability. A deep ruby red colour with purple highlights, a beautifully complex nose characterised by scents of small red berries and balsamic notes reminiscent of Mediterranean scrub vegetation. The quality of the tannins on the palate is particularly striking, smooth and silky. The mouthfeel ends with a lingering finish and unexpected freshness.”. Olga Fusari – Winemaker – May 2019 Grape Varieties 54% Merlot 26% Cabernet Sauvignon 14% Cabernet Franc 6% Petit Verdot 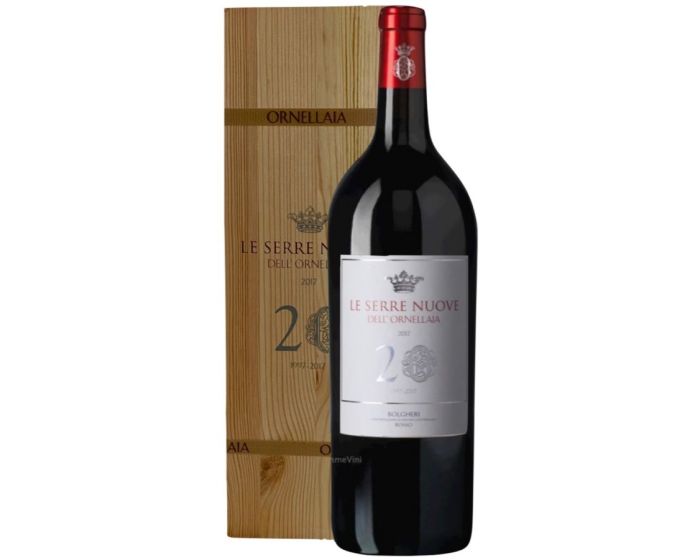